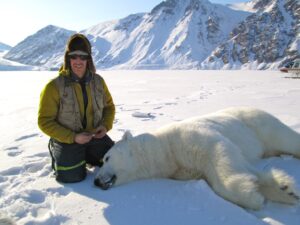 Originally from England, Stephen came to Canada to train as a wildlife biologist. After many years studying polar bears and other arctic species, he went back to school to become a vet.

He works mostly with small animals including all manner of exotic species such as snakes, lizards, and birds. Occasionally he does equine and large animal work.

Dr. Stephen lives near Birds Hill Park with his wife, two daughters, two dogs, a cat, and a pig.